Home > Preparation > Eating and Drinking Before You Go Into Hospital

Eating and Drinking Before You Go Into Hospital 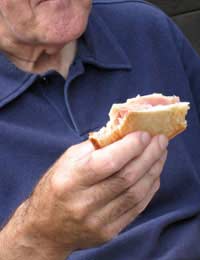 Whether you can eat and drink as normal before you go into hospital will often depend on the type of treatment you’re about to undergo but if you are having anaesthetic, be it general or sometimes even local, you will probably be told not to eat and drink before surgery from midnight on the day before the operation is due to take place, although this is almost certainly the case in all instances where general anaesthetic is being used.

Why Can’t I Eat Or Drink Beforehand?

The reason you are told not to eat or drink anything for several hours before you undergo surgery is to prevent aspiration. This is a term used to describe the process of food and stomach acids which, under anaesthetic, can be regurgitated during surgery and enter into your lungs.

This can happen because under anaesthetic you lose all of your reflexes including the natural capacity to cough and gag when anything is about to enter your airway and, consequently, your lungs. Therefore it’s important that your stomach is empty first.

Some people however, such as diabetics, can keep food in their stomach for a longer period than the norm so they’ll often be given an antacid or some kind of intravenous medication to speed up the rate at which their stomach empties prior to the operation going ahead.

Are There Any Exceptions To This Rule?

Newborn babies would be highly susceptible to becoming dehydrated if they were made to go without food for so long before surgery so, in that instance, they are usually able to have formula or breast milk up to about 4 hours before surgery. Infants too will usually be permitted to drink clear liquid such as apple juice up to around 4 hours before surgery although the longer they can go without, the better.

Depending on the circumstances, sometimes you are permitted to take liquid on board even on the morning of the surgery itself. Usually this would be clear liquids only and you might be permitted to have tea or coffee but without the milk. And, if you’re diabetic, you also need to discuss that with the surgeon first so that they can manage your insulin.

What If I Forget To Stop Eating Or Drinking?

It’s vitally important that you tell the surgeon if you have eaten or drunk anything within the stipulated timescale. Tell them exactly what you had and what time you ate or drank it. Don’t be tempted to try to conceal this as it will only be your own life you’re putting at risk. Mistakes do happen and if the surgeon decides it’s not worth the risk, your surgery is likely to be put off and rescheduled to another day but it’s always better to tell them than to say nothing about it.

Some people may have been told that their surgery is not until the afternoon but they’ve been told not to eat after midnight. This doesn’t mean that you should ignore this just because you’re scheduled for afternoon surgery and you decide to get up at 3 or 4am and have your last meal then. The reason being that afternoon procedures can often move up to the morning and begin ahead of their scheduled time.

Therefore, if you’ve been told not to eat and drink after midnight, you shouldn’t. That also includes things like chewing gum, sweets, mints etc. You’ll need to refrain from anything that causes salivation and you should also refrain from smoking during this period if you haven’t already stopped beforehand which is always a good idea anyway.

You should also not make the mistake of having a gigantic meal or one that contains fried or fatty food before the fasting period commences. Simply eat as normal leading up to midnight on the day before the operation and maybe have a light snack just before midnight if you’re still hungry. It’s also perfectly OK to brush your teeth on the morning of the operation but just remember not to swallow any of the water.

In certain instances, you may be on some kind of medication which your surgeon recommends that you keep taking even right up to the morning of surgery and where this arises, they may allow you to take oral medication with a sip of water. However, all of the advice regarding this issue is given for your own well being so if you have any other questions about this, you should speak to your surgeon in advance of your operation.