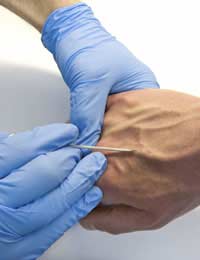 Some forms of operation need to be carried out under general anaesthesia as it is important that you are completely asleep while the surgery is in progress. Operations such as lung surgery and open heart surgery often require the function of your heart and lungs to be taken over by a heart and lung machine and cannot be done any other way.

Other major surgery can sometimes be done under local anaesthetic or with an epidural anaesthetic. In both these cases the person having the operation is fully awake and aware of all that is going on, but is screened from the actual procedure so that they can’t see anything that would make them upset. Having a lesser anaesthetic is less risky and is now used more often for operations such as knee replacement surgery and elbow replacement, as well as for caesarean operations.

Although having a local anaesthetic can remove all of the pain associated with surgery, some procedures are still not very pleasant to have to endure when completely awake. An endoscopy to examine the inside of the stomach can be very difficult to cope with as the insertion of the tube into the throat and oesophagus stimulates the gag reflex continuously. Many people find this impossible to control and extremely distressing. Similarly, having an endoscopy examination of the colon or uterus can be a cause of anxiety and some discomfort.

Rather than putting someone completely to sleep, doctors often combine a local anaesthetic with a sedative to ease this anxiety. Sedation is commonly used for endoscopy procedures and dentistry, particularly for people who have developed a specific dental phobia. Without sedation, it can be difficult to carry out even a simple tooth extraction if anxiety and fear is so extreme.

There are several different forms of sedation that range from a very light sedative effect, given by breathing a mixture of gas and air, to very deep sedation that is only a small step away from general anaesthesia. Dentists often use gas and air as this is quick to take effect and wears off immediately; adults who have this form of sedation can function normally and can return to work and drive the same day.

Intranasal and oral sedation involve taking the sedative drug as either a nasal spray or as a drink. The drugs used produce a deeper sedation than gas and air, but the effect is still fairly light. Someone who has an oral sedative will still be conscious and partially aware of what is going on, but will no longer feel worried or anxious about it. These types of sedative do take a few hours to pass from the body, so it is recommended that you don’t drive or do activities where concentration is important until the next day.

For major procedures such as an endoscopy, the sedative needs to be deeper still and needs to be timed to coincide with the insertion of the endoscope. As this is usually done in an operating theatre, sedation is usually given intravenously through a needle placed in the vein of the back of the hand.

Anxiety about minor surgery and exploratory procedures does not only occur during the time you are being investigated; anxiety is part of anticipating and worrying about the test, and also a big part of remembering and going over the experience in your mind afterwards. There is little that can be done medically to stop someone worrying about a procedure in advance, but the sedative used can be chosen to suppress short term memories. During the operation or investigation you will be calm and sleepy and relatively unaware of things that are happening but afterwards you won’t remember anything. Breaking this cycle of anxiety can make it easier to cope with a follow up procedure; once you know that you don’t remember anything, the anticipation and worry leading up to the event is much less too.

By their nature, sedatives make you feel better about unpleasant events; it is not surprising, therefore, that the drugs used as sedatives can be abused and do then lead to addiction. This can happen when sedatives are used illegally as a recreational drug, or as a side effect of their usual medical use. Ironically, one of the most abused sedatives is propofol, which is often abused by people within the medical profession. This is a quick acting sedative that induces sleep of a few minutes that seems like a few hours – some busy doctors have been discovered using it to survive long work shifts. This is particularly common the USA, where the drug has the nickname ‘pronapping’.
Next Page

Preparing Your Child for Surgery