Home > Preparation > What is Meant By 'Informed Consent'?

What is Meant By 'Informed Consent'? 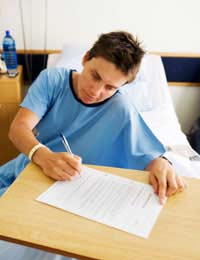 Informed consent helps to protect both the person who is undergoing medical treatment and the hospital that is administering it. It is a form which a patient signs to agree that they are fully aware of the procedure which they are about to undergo, that is has been explained clearly to them and that they agree to it being carried out.

Of course, this doesn’t absolve the hospital of any responsibility if they are negligent in any way and the patient or their next of kin would still be able to take action against the hospital if they deemed that any procedure was not carried out as it was explained or if the surgical team were negligent in the performance of the surgery or treatment.

What Is Implied By Informed Consent?

By signing a consent agreement to treatment, a patient is stating that they are fully aware of their condition and understand the reasons why surgical intervention is necessary and that they have agreed to that being carried out. It implies that the patient has been fully informed about the nature of the surgery as well as being told about any possible risks.

However, it’s important to also state that the patient must not have been put under any pressure to sway their decision and that they have reached their decision based on their full comprehension of the situation.

Of course, a surgeon may make suggestions and offer opinions as well as giving the patient options where there are any and telling the patient the possible consequences if they do not go ahead with the surgery but they must present a balanced view of the overall situation and give the patient as much information as possible.

What If The Patient’s Decision Seems Irrational?

Providing a patient is mentally capable of giving informed consent, the decision must be respected and cannot be overruled. A good example of this would be where a person has signed an agreement that in the event of certain situations arising, they request that no further medical intervention be carried out. They are entitled to take that decision or any other on the basis of their own moral values or religious beliefs providing they were considered mentally fit to do so when they reached that decision.

It is only where the decision defies all perceived moral standards that a person may be deemed incapable of making a rational decision where their consent can be challenged. An example of this would be where someone suffering from anorexia refuses treatment yet they cannot see their health deteriorating.

Some people decide to plan ahead and to set out their wishes in advance of treatment should they lose the capacity to take certain decisions later on. This is often the case where people may be aware that they could succumb to advanced dementia, irretrievable coma, cancer from which they might not recover or permanent incapacity and providing their instructions and directive were set out in writing at a time when they were competent to have reached that decision, then their wishes must be respected. If there is any doubt about that, then it needs to be resolved via a court ruling.

Some parents might be surprised to learn that children, regardless of their age, have the right to independently seek medical advice and give their own valid consent to treatment without their parents’ consent. However, in order to do that, a doctor must be certain that the child in question is competent in terms of their maturity in their understanding of what they’ve agreed to.

Therefore, it’s not always ‘black and white’ when it comes to children giving their consent. For example, a doctor may be quite happy to discuss contraception and even to prescribe a contraceptive solution to a 14 year old but may not think that the same child has the same level of competency in deciding for themselves what treatment they will agree to if, for example, they are suffering from cancer.

This is obviously an area which requires careful thought on behalf of the doctor before deciding whether or not he can agree to a prescribed course of treatment without the parents’ consent. However, in many instances, a doctor would try to suggest to a child in certain instances that their parents should be involved in the decision making process although, whether or not the doctor agrees to carry out the treatment, they must respect the confidentiality of the child and if the child does not wish their parents to be informed, the doctor must respect that.

In conclusion, therefore, providing a person is of sound mind and, in the case of children, they are deemed mature enough to have reached a particular decision about a medical issue, then this must be respected and can only be legally challenged through a court procedure.