Home > Types of Cancer Surgery > What is a Biopsy?

What is a Biopsy? 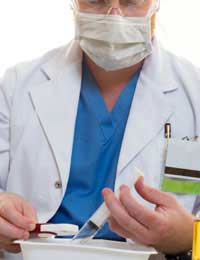 A biopsy involves taking a sample of body tissue, rather than a body fluid, and then using it to perform laboratory tests that are used to make a diagnosis. Biopsies can be done to determine whether a suspicious lump is cancerous, or whether it is a benign cyst, for example. Some biopsies are very minor procedures that involve simply scraping away some cells, but others are done as part of a major operation, in which a larger piece of tissue is removed for analysis.

A biopsy in which samples of cells are removed for testing are the least intrusive of all biopsy procedures. A common one is the removal of the surface cells from the cervix of a woman during a routine smear test for cervical cancer. A speculum is used to allow access to the cervix and then a long specially made cotton bud is used to remove a few cells so that they can be checked for early signs of cancerous changes.

A DNA test, to decide whether a man is the father of a child in a paternity suit, is done by taking a biopsy of the cells from inside the cheek. Another specially made cotton bud is again used but is wiped gently inside the mouth. This is so non-invasive that it can be safely done even in newborn babies.

Having a Needle Biopsy

Often it is not possible to obtain enough tissue for testing just by scraping an easily accessible part of the body. If a lump in the body needs to be investigated, or a particular organ or body part needs to be tested, a needle can be used to aspirate a small amount of tissue. This is more painful than having an injection as a larger needle is used to suck out cells as well as fluid, so a local anaesthetic is recommended.

Positioning the needle to retrieve a sample from the right place can also be difficult and doctors use their knowledge of anatomy in conjunction with images obtained from X-rays or ultrasound scans. A fine needle aspiration biopsy is often used to pull out some of the cells from a breast lump, or from the breast of a woman whose mammogram reveals a denser area of tissue that could be an internal lump.

One of the most intrusive forms of needle biopsy is the type used to take samples of bone marrow. This is done to investigate whether someone with an abnormal blood count has a serious blood disorder, or leukaemia. The needle has to be quite a thick one as it needs to be able to take in the gel-like bone marrow and the site of entry for the needle is usually at the hip bone. This can be uncomfortable and stressful, so a local anaesthetic is usually used in conjunction with a mild sedative. Some sedatives can be used to interrupt memory, so that you don’t remember anything about the procedure afterwards.

Modern medical technology now makes it possible to take internal biopsies without opening up the body during an operation. Endoscopes can now be fitted with miniature operating tools and an internal endoscope biopsy can be taken from the inside of the colon, or intestine, the oesophagus and stomach and inside the vagina or uterus. There are even very clever little capsule devices that mean you don’t have to have an endoscopy if you have something that needs to be checked out in part of your digestive system. After swallowing the capsule, which is only attached to the outside of the body by a very thin tube, its progress through your gut is monitored by X-ray. As soon as the capsule reaches the required place, the external tube is attached to a powerful pump which sucks tissue from the lining of the intestine and into the capsule. The tube then detaches and the capsule then passes on through the large intestine and out of the body. Recovering it may not be exactly pleasant, but is preferable for most people than having an endoscopy.

These are usually performed during an operation that would have taken place anyway. When a breast lump is removed, the tissue is always sent away for analysis. While the surgeon has access to the local lymph nodes, he or she may also take additional biopsies. In other cases, a smaller surgical biopsy is done and then a more extensive operation may follow once the results are known.