Having a Limb Amputated 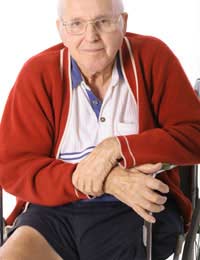 Having a limb amputated can occur as the result of a number of factors which can include:

An amputation is a serious procedure and no two amputations are ever quite the same. This is especially true in cases of amputation due to a traumatic injury as there are obviously so many variables.

In some cases, the affected limb may have been crushed (an avulsion injury) whilst in others, it may already have partly been sliced off (guillotine injury). With the latter, there is more chance of re-attaching the limb but that can never be guaranteed. There is also no set timescale for an operation as there are just too many different factors involved.

The greatest risks posed during an amputation are excessive bleeding and infection as, with such an open wound, the patient is at greater risk from germs and bacteria. A patient going into shock after an amputation is not uncommon either which is a clinical condition that must be dealt with quickly as it can result in unconsciousness.

It would be unrealistic to expect that any amputation will not result in pain for the patient post-surgery. Obviously, in the immediate aftermath of an amputation and for several days after the operation, a patient’s pain will be managed as best as possible by the doctors and nurses. The scale of the pain will vary and will depend on the extent of surgery involved, the location of the part of the limb which has been removed and the amount of blood which has been lost.

Once people have had time to recuperate from the initial pain following the operation, many of them find that they can experience ‘phantom’ pain where they think they’re feeling pain, tingling, numbness or itching where the limb used to be.

Therapy is a vital component in the recovery process for an amputee. It will primarily be given on two fronts – physical and occupational. The physical therapy side will deal with the person learning how to regain strength in the area at which the limb was amputated and they will have to learn how to move what remains of their limb again and to improve the flexibility of the affected part.

Once they have begun to do this and the wound has healed, then it will be time to consider the fitting and use of prosthetic limbs should that be an option that’s open to them and, obviously, also if they want to take advantage of that option. This is where occupational therapy begins where the person will be taught how to cope with everyday tasks again such as learning how to tie their shoes, how to walk again etc. This process can vary in timescale once again depending on the severity of the amputation.

Once the reality of having a limb amputated has sunk in, people can react psychologically to that in many different ways. For some, they are doggedly determined not to be portrayed as a victim and many find that they summon up the courage to lead as normal life as possible again and often they’ll tell you that they never realised they possessed such courage. Whilst, for others, their spirits and will to live can seriously decline and they might need to also seek specialist counselling help in order to prevent them from declining to such an extent mentally that they end up needing help for psychiatric disorders such as anxiety and depression.

In conclusion, amputations are not something that can be got over quickly both on a physical and psychological level but, ultimately, as long as a person tries to remain positive and determined, the sooner they will be able to resume as normal a life as is physically possible.