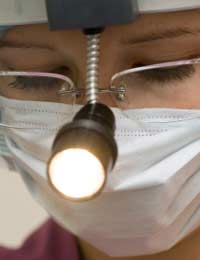 Laser surgery - or therapy as it’s often referred to - is where laser light is used in the treatment of cancer cells. As the light is concentrated, it makes it an extremely precise and powerful tool.

How Is Laser Surgery Beneficial?

Laser surgery is so precise that it can cut microscopic areas even thinner than a human hair. Therefore, it can be used to remove extremely small cancers without causing any damage to the surrounding tissue. Additionally, laser surgery can be used to apply heat to tumours with the aim of causing them to shrink. It can also be used in combination with certain drugs which become activated by laser light and which are then aimed at killing cancerous cells. Laser light is also used in conjunction with microscopic surgery to enable the surgeon to see the site which is being treated more clearly.

There are several different types of laser for performing specific functions when it comes to cancer surgery. CO2 lasers, for example, are used to remove very thin layers of tissue without the need to remove deeper layers from a person’s skin. They are used more commonly in treating skin cancers and other precancerous cells.

YAG lasers are often associated with some dentistry treatments because they can be transported through optical fibres to reach areas of the body that aren’t as easily accessible. Therefore, they are often used to treat certain types of throat cancer.

LITT therapy stands for ‘laser-induced interstitial thermotherapy’ which is a procedure which involves directing heat from a laser towards areas between organs that are close to a tumour. With this procedure, the aim is to increase the tumour’s temperature to cause shrinkage to the tumour or to damage or destroy the active cancer cells.

PDT or ‘photodynamic therapy’ uses argon light to activate certain chemicals in the cancer cells. These chemicals are injected into the patient and then absorbed into the body. The way they react is that they remain longer in the cancerous cells than they do in the healthy cells.

Therefore, when sufficient time has elapsed whereby the healthy cells of the body will be relatively free of the chemicals, then the argon laser’s red light can more easily detect the chemicals in the cancerous area and as it hits the tumour, the cancerous cells within absorb the light and the chemical reaction destroys them.

Argon lasers can pass through about an inch of tissue without causing any damage and whilst they are used for treating cancers which are relatively close the skin’s surface, they can also be passed through the lungs, oesophagus and bladder using a bronchoscope, endoscope and cystoscope respectively.

When Laser Surgery Can Be The Best Option

Laser surgery, in one form or another, is most often considered where cancerous areas are difficult to reach to treat by other methods, where heat is required or to cut only a very tiny area. Cancers relating to the throat and vocal chords, the skin and both male and female genitalia are commonly treated with laser surgery.

Side Effects Of Laser Surgery

Unlike some other forms of cancer surgery, the side effects of laser surgery can be relatively mild although that differs between individuals. The main side effects include relatively small amounts of damage to healthy tissue and sometimes a patient’s eyes and skin can become extremely sensitive to light for around 6 weeks post surgery.

However, side effects will also differ depending upon the type of laser surgery and the area on which it is being carried out so it’s always best to discuss possible side effects with your surgeon before beginning laser treatment.