Home > Case Studies > I Had Keyhole Surgery for Gallstones: A Case Study

I Had Keyhole Surgery for Gallstones: A Case Study 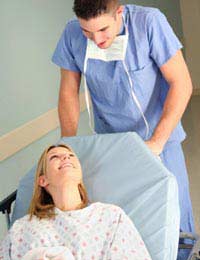 Gillian is obviously pleased with herself, smiling widely as she looks at her record from the local swimming class. After losing nearly two stones in weight in the last 5 months, Gill is now looking extremely fit and healthy.

“I feel really optimistic and well now but 18 months ago, it was a very different story,” says Gillian, who is proud mother to 6 children aged between 16 and 3. “I had always wanted a large family and we really enjoy the noise and rough and tumble of a house full of kids. I have always felt fabulous when I have been pregnant. I put on a bit of weight over the years, but who doesn’t?” she laughs.

At the age of 38, with youngest daughter Nicola just a few months old, Gillian began to feel unwell. “I put it down to having a lot on with the family but I felt really tired and quite sick a lot of the time. I was also waking up absolutely drenched in sweat at night,” recalls Gillian.

The symptoms carried on but were so mild and non-specific that Gillian didn’t even bother going to see her doctor. One night, however, she ended up in casualty after developing severe pains suddenly that affected her left arm and shoulder. “I was convinced I was having a heart attack – I had never felt pain like it. Nothing helped and we got Steve’s mum to come over and he drove me to the hospital.

An electrocardiogram showed nothing abnormal and the pain went as quickly as it had come. Gillian went home but was advised to see her GP. “You know how it is – I meant to go but with so many things to do, I just never got round to it,” says Gillian.

She still continued to feel vaguely under the weather but with no more pain she carried on as normal for another 8 months. “It was my older daughter’s 15th birthday we went out for a Chinese buffet. When we got home I was doubled up in pain and was violently sick. My fears of a heart attack came back but the pain disappeared again and I then thought it was just indigestion. I was going to ignore it all again but Steve insisted I went to see what was wrong.”

Used to having ultrasound scans in pregnancy, Gillian was given another scan as part of a range of tests and it showed that she had gallstones. “Apparently, gallstones are common in women aged 20 – 40 years who are overweight and who have had multiple pregnancies. I had no idea, but I was a gall stone case waiting to happen,” says Gillian, whose sense of humour has never really failed her.

“Things happened quite fast after the test results. I was told that my gallstones were quite large and couldn’t be broken up – I was going to have to have an operation to remove them. I remember crying in the doctor’s. I had given birth to six children naturally and now I was going to have a big scar after all!”Fortunately for Gillian, the surgeon at the nearby hospital was a great advocate of keyhole surgery using a laparoscope to remove gallstones. “He said that there would only be three small cuts around my belly button and he would then introduce some carbon dioxide inside my tummy to swell it up to make space to see with the instruments and camera that would send pictures to a computer. It also sounded very high-tech,” says Gillian.

The operation took place on a Monday morning and Gillian was pleased to be allowed home on the Tuesday afternoon. “I was a bit sore but the incisions were quite small and I didn’t feel too bad after the anaesthetic. One of the other people had had surgery for a hernia and wasn’t able to have his gallstones removed using the keyhole technique and he took much longer than me to be up and about again,” says Gillian.

As is common after surgery to remove gallstones, Gillian did suffer from diarrhoea for about three weeks afterwards but this cleared up and she felt better than she had done since Nicola was born. “I was more like my old self again and I was then determined that this wouldn’t happen again. We had already decided that our family was complete but I knew it was time to lose weight.”

Gillian has now managed to successfully reduce her weigh and plans to lose another stone to reach her target – to fit into a size 12 again to celebrate her 20th wedding anniversary next year.