Home > Types of Surgery > Having Your Appendix Removed

Having Your Appendix Removed 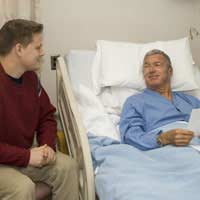 No surgical procedure is ever pleasant nor can it be guaranteed that there will be no risk whatsoever in terms of something going wrong but having your appendix removed (appendectomy) falls into the category of it being one of the more simple and straightforward surgical procedures for the most part.

Where Is My Appendix?

Your appendix is a small pouch, shaped a bit like a finger, that projects outwards from your colon on your right hand side and it serves no useful purpose in your body’s ability to function.

Appendicitis is the clinical term used to describe the condition which will usually lead up to you needing to have your appendix removed. The symptoms may start with a loss of appetite and, perhaps, a feeling of nausea, followed by vomiting and fever-type symptoms.

You’ll start to feel a pain which might begin at your navel but will then extend to the lower right side of your abdomen, just below the pelvic area. Over a period of 12 to 24 hours, the pain is likely to intensify. It is at this point that it’s imperative that your appendix is removed. In itself, this is not a major problem but if left untreated, it can become perforated and can then start to leak which can then lead to a much greater infection of your entire abdominal area which can result in peritonitis and that can be fatal.

In very rare instances, an appendix can rupture and that is also cause for extreme concern. However, that is quite the exception to the rule. If it should happen, however, then that is an emergency and the symptoms are often where you think you’re getting better than suddenly the pain returns and the area might feel hard and extremely sensitive to pain when touched.

Therefore, if you think you are experiencing symptoms the same or similar to those described above, you need to address these and go to the hospital, even though, the likelihood is it will be nothing more serious than a straightforward appendix removal.

For a standard appendix removal, the surgery is very straightforward and rarely presents any major problems. It can be performed in one of two ways – either as a traditional (open) surgical procedure or by having a laparoscopy. This is a form of procedure commonly referred to as ‘keyhole surgery’ and it is minimally invasive.

Whichever way the appendectomy is carried out you will be given a general anaesthetic which will mean that you will fall asleep and not feel or be aware of anything taking place. Should the surgeon decide that open surgery is more appropriate, for whatever reason, it will mean a relatively small incision into the abdomen, just between your navel and hip bone. This will then allow the surgeon to remove the appendix simply and quickly.

A laparoscopy is where no major incision as such is required and only a small hole is needed into which is inserted a kind of bendy microscope which not only allows the surgeon to see what’s going on inside your abdomen but comes fully equipped to enable the surgeon to actually remove the appendix simply by using the scope and its related tools.

Where it’s completely straightforward, it’s obviously better to have the procedure carried out via this method and surgeons will opt to use it unless there is a clinical reason why only open surgery is possible.

The recovery after undergoing an appendectomy can vary to each individual, some people have reported the process as slow, taking upto 4 weeks to recover!

Can Robots Perform Operations?
Share Your Story, Join the Discussion or Seek Advice..
Can appendix be removedbby spinal anesthetic as I cannot have general anesthetic?
pikey - 30-May-14 @ 12:21 AM
i might hav emppendix not to shwer i get pains an both side of my stomic on the botm it hurts what dos that mean
miky - 21-Sep-12 @ 4:21 AM
Title:
(never shown)
Firstname:
(never shown)
Surname:
(never shown)
Email:
(never shown)
Nickname:
(shown)
Comment:
Validate: